Today was the Nike+ Run to the Beat starting and finishing in Greenwich Park. Now I would upload my map from my runkeeper.com app however I managed to turn it off whilst running, so I can tell you that indeed there were no PB’s today – I managed 2 hours and 5 mins and 17 secs.   Though I am quite pleased with the time as I did take a toilet break (I was busting) and we came to a completely stop about mile 5 (Woolwich Arsenal).  There were a few moans and groans as we filed into the courtyard of said barracks and then run around a steel band, a water station and Vita Coco and then back to stand in a queue to file out of the barracks.  I don’t think anyone understood what that was all about and why you’d want to squeeze so many people through a tiny gate!

I didn’t mention that we also set off about 15-20 mins later than we were supposed to with no explanation and although this event was billed as a music marathon full of music pumping around the course there wasn’t much music.  In fact I wish I had worn my headphones for there were long periods without music and without support and on those long runs the music keeps me going.  There were the occasional dj’s along the course but not many.

Mile 12 to 13 was a killer as not only was it uphill you kept on looping around areas within the park to find yourself with no finishing line in sight – it was all very confusing.

Anyway, I’m back home and it’s done and I’m not sure that I’d do this one again but at least I can say I’ve done it and I have another medal to add to my collection!! 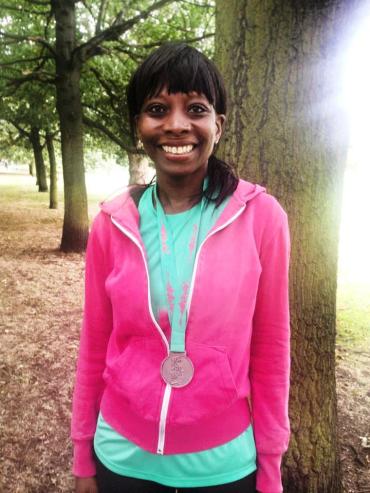 My Most Recent Posts

This site is a compilation of poetic pieces written under the influence of life,pain, and good energy

Synonymous with style and intelligence; for those with a passion for all things phenomenal

You Think So You Can

4 out of 5 dentists recommend this WordPress.com site

The Fat Girls Guide To Running

The worlds No1 site for advice, support and resources for overweight runners

“There is nothing more rare, nor more beautiful, than a woman being unapologetically herself; comfortable in her perfect imperfection...” ~ Steve Maraboli

Beautiful photos of hiking and other outdoor adventures.

Rather Be Runnin'
Run5kaday's Blog

The House of Wolves

Knowledge and Happiness(K&H) multiples by dividing it. More you share, higher and bigger they grow.

the CITIZENS of FASHION

I made the impossible easy in both worlds!

Full time in everything woman trying to balance it all

WordPress.com: Because You're Worth It

Baking Joy Into Every Gluten-free Bite

Photographs from my world.

Breaking the Gainline: The Hard Yards

Rugby is a global game and this blog will bring us all together in one place. It will go behind the scenes of professional rugby as well as tackling key rugby issues. We will talk to experts and gain an insight. For example, should the salary cap remain? Should Bath move from the Recreation Ground and Cardiff Blues from the Arms Park?

If there is any magic in this world...

The world can be amazing when you are slightly … strange!

It will change your life.

Evans Tang | Music. Health. Knowledge.
Top 10 of Anything and Everything - The Fun Top Ten Blog

My love hate struggle with running

n. frugality; the quality of being economical with money or food.

Running 20 Marathons in 2012 for the Inspire Foundation (ReachOut.com)

The Miles & Musings of a Friendly Runner

A 20-something Texas girl running, studying, eating too much peanut butter and just figuring life out.